You know you need a vacation, or a new job, when you’re excited to see the jury summons. In the past year and a half at my job, I’ve taken only 5 vacation days. This is partly because I only get 10 vacation days, and 10 days is not enough to go on a trip and really relax. But it’s also because I’m not sure if I’ll be going on a permanent vacation (meaning layoffs). In any case, the timing of the jury duty summons was perfect.

As luck would have it, I got picked to be on a case. So for the past week, I’ve been leaving my car parked, walking to the Metro station, taking the Red Line to Downtown LA, enjoying 90 minute lunch every day (mandatory according to union rules), walking to Little Tokyo for sushi at my favorite place, meeting with ex-coworkers, and did I mention NOT driving? My daily schedule has been 10 a.m. to 3 p.m. and every day I’ve been getting home early enough to jump in the pool and hang out with my fabulous neighbors. (And one of my neighbors is especially cute, so every day I get to gaze at him, in his shirtless glory, admiring his perfect biceps and the rest of his perfect physique.)

So after a week of vacation, I mean jury duty, I have to go back to work. I can’t believe how much I’ve enjoyed jury duty. I’m really sad that I’m going to have to get up early enough to be at work at 8:15 a.m. So next time I get a jury duty summons, I’m going to beg them to put me on a case.

Almost forgot… Last week, I think it was Friday, I get to court and I see paparazzi running around the courthouse. One of the jurors tells me that she thinks Britney is at the courthouse. So I decide to follow the paparazzi and see where they’re headed. And I see Denise Richards, walking down the street, with her lawyer, and a bunch of paparazzi following her. I have a sneaky suspicion that she called the paparazzi herself and gave them her itinerary for the day to make sure she gets her photo taken. She’s such a media whore. I still can’t believe she went on The View and said that the reason she’s doing a reality show is because it was her dying mother’s last wish. Really? Your cancer stricken mother wanted you to do a reality show on E! ? Wow. I can’t believe you’re using your dead mother to justify your decision. How about you just come clean and admit that you’re doing the show because you can’t get a job and you need attention. It’s so NOT COMPLICATED. 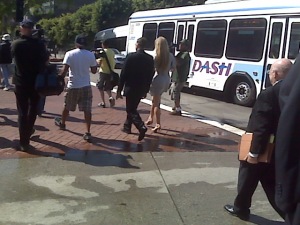 Denise Richards walking down the street

2 thoughts on “I Love Jury Duty”